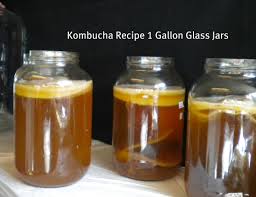 Kombucha Tea is known as a popular health promoting beverage and natural folk remedy. The Kombucha culture looks like a white rubbery pancake. It is a symbiotic culture of yeast and other microorganisms. The culture is placed in black or green tea with sugar and turns the tea into health giving acids and nutrients. The Kombucha culture feeds on the sugar and, in exchange, produces other valuable substances which change into the drink. The Kombucha reproduces another culture or fungus every brew, so once you acquire your kombucha culture there is no need to buy or purchase another Kombucha culture, mushroom or fungus, you can then pass it on to your friends as a great gift idea. Kombucha Tea is a biologically active product fermented with a living culture to become a natural living food high in enzymes. It is a pleasant tasting sparkling healthy drink. Unlike popular carbonated beverages that rob the body of calcium, the natural sparkling effect of kombucha Tea is not detrimental to the body. Most commercial cool drinks are very high in sugar. The fermentation process of Kombucha leaves it virtually sugar free. The sugar and tea with the help of the Kombucha culture, are transformed to valuable acids, beneficial especially for the intestinal tract. There are also anti oxidants in Kombucha Tea through the use of green tea used to make Kombucha Tea.

It is thought that Kombucha mushroom, a fermented yeast enzyme tea, originated in Asia during the Chinese Tsin dynasty in 212BC. This Eastern Tea was referred to as the Remedy for Immortality or the tea of Immortality. With the extension of trade routes it spread to India and Russia through travelers and traders. Kombucha resurfaced in Japan between the Wars after a Japanese visitor to Kargasok (Russia) found this fermented tea drink responsible for their astonishing health, longevity and well-being. It may have been introduced to Japan by a Korean physician by the name of Kombu around 415 AD. Today the tea – once routinely used by Samurai – is widely used again in Japan. Kombucha appeared in Germany about the turn of the century from Russia. This fermented tea drink became quite popular across Europe until World War II with the shortage of tea and sugar.

For hundreds of years a tea has been made from Chaga (a birch-tree mushroom) by the Russian peasants of the Alexandrove district near Moscow to cure cancer. There is speculation that the Kombucha mushroom is related to the Birch-tree mushroom.

Wherever this tea originated from it is now known throughout the world.  Kombucha Mushroom tea has been known by many names in many cultures. In 18th century Russia it was known as Cajnyj Kvas, in China as Cha Gu, in Germany as Heldenpilz.

Over all these years many stories have been told of how this fermented tea beverage, Kombucha has appeared to have performed miracles. Hence names such as miracle fungus, magical fungus, elixir of life and gout tea.

Fermented foods are easier absorbed by the body. Brewing your kombucha Culture in tea results in Kombucha Tea which is high in beneficial acids known for its detoxifying properties, energising, maintaining a healthy digestive tract and helps balance the body’s pH. These products are in high demand from the general public and have proven to be successful in maintaining health. Now that you know where to get your Organic Kombucha Mushroom or Fungus you can make your own fermented beverages. 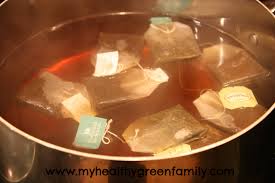 Recipe for your basic Brew of Kombucha Tea

Boil the water in a stainless steel pot, add sugar, turn off heat and stir sugar until dissolved. Add teabags and let soak for 10 to 15 minutes. Remove tea bags and allow to cool. Strain (not necessary) and pour into fermenting jar. Add the fungus and mother tea to the jar. Cover and leave for one week in a place free

This recipe is for fruit flavoured Kombucha Tea

2 fruit flavoured Tea bags (you can mix them)

400 ml (1 3/4cup /14 fl oz)Kombucha tea (mother tea), from your last brew or obtained with the mushroom / fungus. If you don’t have enough mother liquid

Boil the water in a stainless steel pot, add sugar, turn off heat and stir sugar until dissolved. Add teabags and let soak for 10 to 15 minutes. Remove tea bags and allow to cool. Strain and pour into fermenting jar. Add the fungus and mother tea to the jar. Cover and leave for one week in a place free from contaminants such as mould, cooking fats etc.

Strain this brew with a fine cloth or paper towel after removing the tea bags as some fruit or herbal teas leave an oily film on the top of the brew. This will not kill the culture however it will help the culture if you occasionally do a brew with the basic brew.

My favourite fruit flavour is Blackcurrant or blackcurrent and rosehip 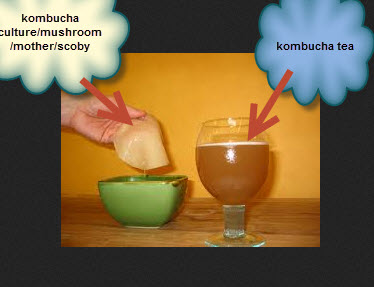 What does Mold on a culture look like? Kombucha culture mushroom mold is a growth of dark coloured fuzz. It can be green, black, white or grey mold, but it is always fuzzy. It is caused by mould spores landing on the culture. If mould develops throw the batch out and start again. It is important to add at least 10 – 15% fermented Kombucha Tea at the start of each new batch to help reduce the risk of mould. The feeding solution, mother tea or ferment that is added to each new batch makes the solution acidic, and moulds tend to not grow well in an acidic solution. If you don’t have enough mother tea you can use approximately ½ to 1 regular spoon of distilled vinegar per litre of tea. Remember, this is only if absolutely necessary. A good idea is to use disposable paper towels, tissues, clean handkerchief, anything that will allow the kombucha brew to breath but not allow mold spores in – always secure it with a rubber band. The cloth also needs to be very clean. Try not to place the fermenting brew in situations where mold is common eg: on the floor, under the sink, in a shower stall, in the bathroom, in the laundry room, in the garage. Other places that are not good are: The kitchen – The steam and fat odors are detrimental to the growth of Kombucha. Next to pots – There may be damaging bacteria in plant soil. Any room in which cigarette or similar smoke can occur is an absolute no! Cigarette smoking causes mould to grow on top of the culture. Kombucha loves warmth, so room temperatures of around 21° Centigrade/celsius (70° Fahrenheit) are good to grow the Kombucha culture. The optimal growth is in the range of about 27 – 29° Centigrade/celsius (80° to 85° Fahrenheit). If you can’t provide this warmth try to get a low heating plate.

My favourite method is to fill a spray bottle with distilled vinegar (white vinegar boiled for 10 minutes and cooled). Spray the top of the brew every couple of days until you feel that the treat of mould has gone.

The fungus that I am talking about is not the newly formed baby culture that forms on top of the brew but the one added with the mother liquid.

It doesn’t matter if it floats or sinks. However some people prefer that it lay at the bottom of the brew and not at the top exposed to air.

What to do if you don’t have enough mother liquid

Do I have to have Kombucha tea to make a new batch?

The answer is yes!

However, it may be possible to make a very small brew the size of a cup of tea and add the culture only or a small amount of mother liquid that you may have.

Brew this for as long as possible until it is really sour. Then use the brewed ‘cup of tea’ as your mother liquid and culture for a larger brew. Gradually build up until you have enough to make the size that you need.

Always try to keep some saved in a glass jar in the refrigerator.